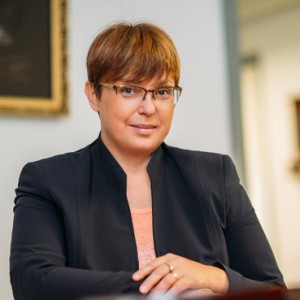 Nataša Pirc Musar was born in 1968 in Ljubljana. After graduating from the Faculty of Law of the University of Ljubljana in 1992, she passed the national bar examination in 1997 and completed PhD sttudies in 2015 at Vienna University, Austria.

She was employed for six years at the Slovenian national television station as a journalist and news presenter for the main news programme.

Subsequently, she worked for five years as a news presenter on “24 ur”, the primary information programme of the largest commercial television broadcaster in Slovenia, POP TV.

In 2001 she moved to the financial sector, where she joined the largest Slovenian private financial corporation, Aktiva Group, as Head of Corporate Communications.

In April 2003 she became the Director of the Training and Communications Centre of the Supreme Court of the Republic of Slovenia. Since 2004 until 2014 Nataša has held the office of Information Commissioner (in charge for Data Protection and Access to public information).

In October 2009, Nataša Pirc Musar was elected Vice President of the Europol Joint Supervisory Body, and in March 2013 President of the JSB Europol. Nataša established her own law firm in Janury 1, 2015.
Website