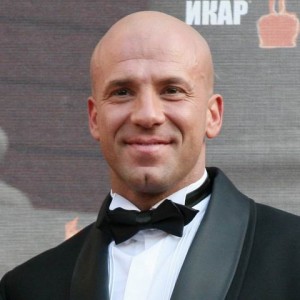 Born into a family of teachers, Encho Keryazov was born in 1973 in Elhovo, Bulgaria. At the age of 6 years his mother has the idea to start a training with the rather frail boy, so he begins an acrobatic training in a local sports club, although his trainers deny his physical prerequisites. However, his upcoming ambition and obviously talent finally convince them. At age of 14 Keryazov is Youth Champion in Sport Acrobatics, the following year he is member of the Bulgarian national team and national champion of sports acrobatics.

As a 16-year-old he has his first real touch with circus and joins the Jockey cavalry troup “Romanovi” and he travels throughout Europe for seven years.

In the following year Keryazov developes an independent equilibristics act. With the presentation of a very special handstand acrobatic act he wins prizes in England, Holland, France and Germany. One of the temporary highlights of his career is winning the Audience Award and the “Silver Clown” at the International Circus Festival of Monte-Carlo in 2007. 2011 he receives the highest award of the Bulgarian Artists Association, the “IKAR” and becomes an honorary citizen of his home town of Yambol.

In 2011 he founds the Foundation Encho Keryazov, with support of other Bulgarian celebrities, which promotes talented young people engaged in science, arts and sports, giving ideational and financial support. The Foundation has gained national and international attention, so that the annual awards, be held since 2012 in Keryazov’s hometown Yambol, where the awards are given to children and young people, are in the presence of the Bulgarian Minister of Foreign Affairs Kristian Vigenin, the Minister of Culture Weschdi Raschidow and the ambassadors from Germany and the Netherlands.

As part of a special edition Keryazov appeared alongside other artists Circus Roncalli on an Austrian stamp.

2011 he was a jury member in the television show “Bulgaria’s got talent”. In January 2012, a 45-minute documentary about Keryazovs life and career is broadcast in the television station bTV (Bulgaria), directed by Georgi Tochev. His engagement at the famous Circus Roncalli in Germany and various performances, such as a sporting gala by Arnold Schwarzenegger in the USA 2012 and 2014, give Encho Keryazov consistent international recognition.

On 24 May 2012, the Day of Bulgarian Enlightenment and Culture and Slavonic Literature (this public celebratory event is closely linked to the development of the Cyrillic alphabet Cyrillic Alphabet Day, Keryazov is at the suggestion of the Bulgarian Ministry of Culture awarded the “Golden Age” for outstanding contribution to Bulgarian culture and awarded funding of Bulgarian art and culture abroad.

Keryazov is married to the former athlete and artist Dimitrinka Keryazova and has two sons, those are already occurring with an own acrobatic number.

Keryazov is currently setting up a trampoline sports club in Bulgaria. Since end of October 2013 he joined the “Palazzo” in Mannheim, Germany, for the 2014 season he is engaged at the Swiss National Circus Circus Knie and will then tour the United States.

2002: circus artist of the year – Netherlands

2004: circus artist of the year – Netherlands

2006: Silver Star at the international circus festival in Grenoble, France

given by Stardust Circus International

2012: Golden Age for outstanding contributions to the promotion of Bulgarian culture and Bulgarian art and culture abroad

2013: silver bear at the 6. international circus festival in Ischewsk