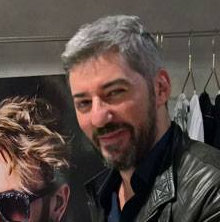 Founder and President of IFDA - Italian Academy for Fashion and Design.

Thanks to his idea, during the Paris Parades in 1995, the first live online broadcast of the world premiere of E. Coveri was realized.
To mark the peak of his career, in ’96 he won an international contest, organized by the United Nations in Geneva, and was announced as a designer of O.N.U.
In 1997, he founded the brand Daniele Fittole Couture (today D.F. Design), one of the first vanguard brands in Italy and “Milano Collezioni” for his creations. In addition to clothing, special attention is paid to the creation of accessories: footwear and glasses.
Apart from his career as a designer, he is devoted to teaching. For 7 years he was chair of the department for Fashion Design at Accademia della Spettacolo e della Moda (Academy for Costume and Fashion) of Milan and in 2001 he founded Ged training company. Since then, he has been devoted to leading the school and has created numerous brands related to the teaching of the fashion system professions.
Lastly, IFDA (Italian Fashion and Design Academy) brings together its experience and collaboration in the profession by offering training courses ranging from fashion to design. Under his leadership renowned professionals in the industry form all-round students.